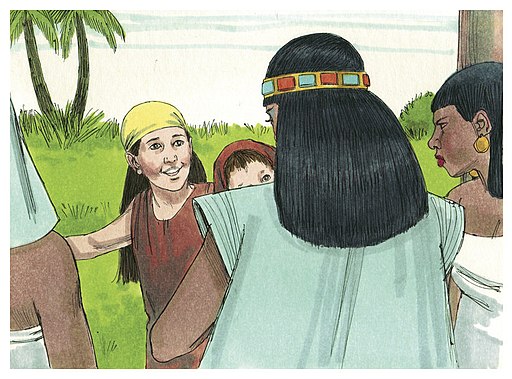 The biblical character Myriam, sister of Moses, features relatively prominently in children’s Bibles and Bible stories, despite only appearing a handful of times in Exodus and Numbers. Sacred Texts’ Cath Kennedy sat down with Kirsi Cobb who lectures in Old Testament at Cliff College and specialised in the portrayal of Myriam in the Old Testament for her PhD. Their conversation produced two blog posts. In this, the first, they discuss the story of baby Moses and Myriam’s role in it and find traces of sexism and antisemitism in the traditional form of the story.

Moses’ sister Myriam is well-known to children who attend Sunday school. She is the brave big sister who oversees baby Moses’ rescue by Pharaoh’s daughter. There may be no bulrushes in Exodus, but from the mid-19th century onwards in the West, the story was often entitled “Moses in the Bulrushes” and was the only episode of Myriam’s life which most children heard. So what is at stake in this traditional Bible tale, and how accurate is it to the biblical narrative?

Moses in the Bulrushes: the plot

A mother needs to protect her son from the henchmen of a wicked king who has ordered all baby boys from her community be killed (Exodus 1:22; 2:1-10). He is getting too big to be hidden (to be disguised as a girl??) so she devises a radical plan. She floats him on the Nile in a basket, and he is retrieved by a princess who decides to adopt him. The baby’s sister has been left to keep watch, and she suggests that the baby might be wet nursed by a local woman of the same ethnicity. And so baby Moses’ natural mother is employed by his adoptive mother to foster him. These elements are usually present to some degree in children’s versions of this story from Exodus chapter one.

How does this compare to the canonical text? Well, the sister is unnamed in Exodus, but Kirsi points out that there is a strong tradition in Judaism and Christianity associating her with Moses’ adult sister Myriam (Numbers 26:59; 1 Chron 6:3), who features later in Exodus 15 and Numbers 12. However, Moses’ unnamed mother is described literally in the Hebrew as the “daughter of a priest”, and here, translation tradition gets controversial. For example, where men are described as “sons of” prophets or priests they are translated as prophets and priests themselves. However, women are systematically translated differently: they remain daughters, rather than having roles of their own. Would it be more accurate to translate Moses’ mother as a priest(ess) than as the daughter of one? Such a translation would, in fact, accord with the overall narrative. Moses’ wife Zipporah, whom he marries in Exodus 1:21 is the daughter of Jethro the priest, and she performs the ritual of circumcision on their sons, saving Moses from divine wrath in Exodus 4:24-26. She certainly sounds like a priestly character. And then there is Pharaoh’s daughter herself. Pharaohs’ daughters generally became either diplomatic wives or priests/priestesses of various Egyptian cults. Perhaps, if we are very bold here, the transaction between the distraught mother and the princess was an arrangement between two priestly women who knew each other but possibly pretended not to. In the biblical text, Moses’ destiny can be read as determined and steered by priestly women, even if other interpretations are available.

Given that these female priests are soon replaced by the very male Aaronic priesthood, so I wondered if it would be fair to say that the Exodus is concerned to exclude women from the religious life of the community? Kirsi thinks not, or not necessarily. It is true that the Aaronic priesthood is exclusively male and that no formal role for women in worship is mentioned in the Pentateuch, but the Exodus is more complex than this one theme. For a start, in Kirsi’s reading, the Hebrews are saved by women’s actions in chapters one and two, with no angelic appearances or divine instructions. They simply do the sorts of things that women would do; they bear children, protect them and care for them, often as a team. This contrasts starkly with the male characters who require burning bushes, magical snakes, plagues, and constant divine pep-talks. As Kirsi puts it, “Moses seems almost incapable of thinking for himself!”

Furthermore, there are occasions in the Pentateuch where God is described in maternal terms, which are rare, but significant. Moses asks God if he, Moses, should have to care for “all these people”, since he did not give birth to them (Numbers 11:11-15). By implication, God did, and ought to be mothering them himself. God’s actions in the desert are also to do with providing sustenance, shelter and basic discipline to a very immature group. On the other hand, some of the threats to God’s people in Numbers could be read as a result of God not providing like a good parent, or not like a good mother: the quail he “provides” when the people pine for meat kills them (11:4-6, 18-23; 31-34). Yet, in Exodus 16 the provision of quail illustrates God’s care without the presence of any death threats. and snakes he sends punish the group indiscriminately for complaints which were made, but probably not by everyone. God is obviously capable of looking after the Hebrews, so the question must be asked why he at times seems to be prone to somewhat extreme parenting strategies? Ultimately, is there something about God being recognized as maternal that God, or the author, is uncomfortable with?

According to Kirsi, the story of the infant Moses being saved by three women can be read as a preamble setting up the major themes of the book of Exodus, establishing the things that women do spontaneously as not only essential to God’s plan, but participating directly in God’s own nature and action. While the story of the infant Moses can be read as signifying that women should stick to childbearing and childrearing, it also promotes a more subtle theological theme of a God who is more than just stereotypically male. A theme continued through the other appearances of women in the book, especially at the end of the Exodus narrative, on the other side of the Red Sea, as will be discussed in our next blog post.

Kirsi and I discussed the implications of the children’s story at some length and reached some conclusions. In the ‘baby in the basket’ story, Myriam is presented as a child who charms a rather dim princess into returning the baby to his mother, at least temporarily. This contrasts with the suggestion in the biblical text that Miriam as a ‘young woman’ (Exodus 2:8) would probably be a teenager who understands the drama being played out and her role in it. The sister is neither named nor described, but she is bold enough to approach a princess’s entourage and speak directly to her. She is decisive and self-assured. The adaptations we present to children fail to reflect these more adult attributes, and make a formidable young woman, daughter to a (presumably) even more formidable priestly mother, into little more than a baby herself. Because of this, child readers and hearers of the story are deprived of a valuable assertive female role model. Although the story is charming, it falls short of passing on everything the Exodus narrative has to offer, especially in its portrayal of Myriam. Perhaps future retellings could engage a little more with adolescent Myriam, her Mother, and their royal ally, and showcase some female leadership for a change.

However, another issue tends to be obscured by this discussion of gender politics: latent antisemitism. It is worth bearing in mind that the story of the baby in the basket which is so familiar to us is mostly a product of Victorian Christianity, which developed the orientalist presentation of children’s Bible stories we are so familiar with to such an extent that we no longer question it. Before the Victorian era, biblical characters were often portrayed in contemporary dress, to prompt comparisons with the readers’ context. This was extensive in Judaism as well as Christianity, as the 14th century Haggadah in the Rylands library shows. (Pages viewable here : bit.ly/38afyKe) But 19th century Christianity moved away from this, picturing Bible stories as taking place in faraway lands inhabited by people wearing oriental clothing such as head cloths, who were often barefoot. The Jewishness of these characters was emphasized, associating Jewish identity with distant places and contexts, delegitimising Jewish participation in British national life, and subtly suggesting Jewish people did not belong in Britain. The dominant presentation of Old Testament stories for children continues to reflect this, although the anti-Semitism and racism of the Victorian era is no longer acceptable in mainstream churches.

The story of baby Moses compounds the problems of orientalist presentation when it presents Moses’ mother and sister as manipulative and sly, and the princess as too daft to see she is being played. It perpetuates colonialist tropes which applied sweeping negative stereotyping to ethnic groups, perceiving this to be the application of science. Today, we know better than to suggest that ethnicity dictates individuals’ moral failings, but the Bible stories told to children have not necessarily kept up with cultural progress. Beyond gender stereotyping and the failure of this children’s story to reflect the complexity of the biblical narrative, a greater sensitivity to outdated ideologies of a different kind would serve us well when we select materials for use in Churches and schools. Not all versions of the Moses in the bulrushes story perpetuate these problems, but those which do are possibly not what we would choose to use.

Dr Kirsi Cobb joined Cliff College in September 2013, following her PhD graduation from The University of Wales, Bangor, the year before. Her PhD dissertation was on the biblical figure of Miriam and the multiple ways her story can be read using different hermeneutic methods.

Kirsi’s main research interests are women’s studies and biblical interpretation, especially of the Old Testament. Her recent research projects centre on troubling and violent passages in the Hebrew Bible such as Hosea 2 and Miriam’s Song in Exodus 15:21, using lenses of trauma theory, autoethnography, revenge and abuse. Her research seeks to find ways to better understand such disturbing themes in the Bible and read women’s stories in more empowering ways.

Together with Dr Holly Morse of The University of Manchester, Kirsi is also the co-founder and co-director of the Bible, Gender and Church Research Centre. The Centre aims to foster research in biblical gender studies through various projects to effect change in the Church and academia, so both women and men can be empowered ‘to live life to the full’. (See the centre’s website here: https://cliffcollege.ac.uk/about-cliff-college/the-bible-gender-and-church-research-centre)

Kirsi’s latest publication is: ‘Reading Gomer with Questions: A Trauma-Informed Feminist Study of How the Experience of Intimate Partner Violence and the Presence of Religious Belief Shape the Reading of Hosea 2:2-23’ in K. O’Donnell and K. Cross (eds.), Feminist Trauma Theologies: Body, Scripture & Church in Critical Perspective (SCM Press), 2020. (available here: https://scmpress.hymnsam.co.uk/books/9780334058724/feminist-trauma-theologies) Kirsi can be found on twitter as @CobbKirsi, and her thesis is available at: https://ethos.bl.uk/OrderDetails.do?uin=uk.bl.ethos.556084

This work is licensed under a Creative Commons Attribution 4.0 International License.

This site is part of Humanities Commons. Explore other sites on this network or register to build your own.
Terms of ServicePrivacy PolicyGuidelines for Participation
Skip to toolbar